Blue cheese pepper poppers are a delicious stuffed peppers appetizer. Sweet bell peppers are stuffed with blue cheese, then grilled until they’re warm and the melted cheese is oozing! If you like blue cheese, you’ll love this easy appetizer recipe! Jalapeño Pepper Poppers became quite popular some time ago, however, was never really a fan. While I love spicy food, biting directly into something so hot and spicy isn’t my idea of fun. These Blue Cheese Pepper Poppers, however, I could eat all day. Sweet, crunchy bell peppers are versatile and taste fabulous cooked or raw.

I’ll be honest, I’m not that great with the grill, but these blue cheese pepper poppers were pretty straight forward and simple to make.

If you love easy grill recipes, you should try my grilled sweet corn on the cob. It’s super easy to make and tastes amazing!

Here’s a look at all the bell pepper recipes being shared today, or you can just scroll down and head straight for my Blue Cheese Pepper Poppers recipe.

Stuffed Bell Peppers with Chicken and Cheddar by Cook the Story

Onions and Peppers Naan Pizzas by poet in the pantry

Steak Fajitas with Drunken Peppers by Cravings of a Lunatic

Blue Cheese Pepper Poppers by {i love} my disorganized life

Spinach, Pepper, Mushroom and Tomato Frittata by Take A Bite Out of Boca

Goat Cheese with Bell Pepper Spread by The Redhead Baker 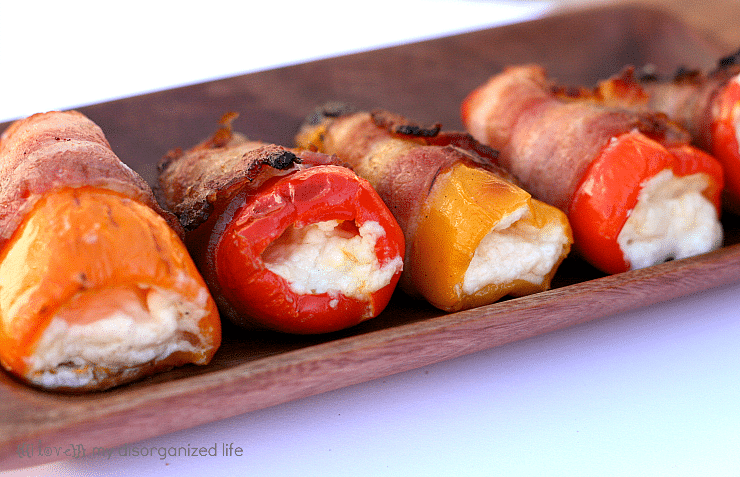