A home-cooked meal is important to me and my family. Not only does it mean more nutritious, good food, but it inspires time around the dinner table as a family.
I’ll admit, however, that there are days when I just don’t have the energy, or the time, to make a home-cooked meal. It’s on days like that, that I am so thankful for Kraft Recipe Makers. I discovered them at my local Safeway in the meat department, shelved on racks near the refrigerated meat coolers.

Kraft Recipe Makers are combinations of two savory sauces that, along with your fresh ingredients, make one of three fabulous dishes. Recipe Makers comes in seven delicious varieties, and I like the fact that each Recipe Makers can be made from a variety of prep methods, including in a slow cooker, skillet or oven. 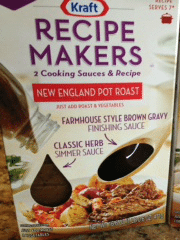 On this particular day, I knew I had a lot of work to do and wouldn’t have the time, or the energy, to make a great meal. So, rather than ordering take-out, I simply picked up Kraft Recipe Makers New England Pot Roast. The Classic Herb Simmer Sauce and the Farmhouse Style Brown Gravy Finishing Sauce spoke volumes to me. However, I wasn’t quite in the mood for pot roast. Checking the side of the box, I found the ingredient list for an easy slow cooker Beef Stroganoff.

It was super quick and easy to throw together. Just a little vegetable cutting in the beginning and pasta boiling later on you’re pretty much good to go. I let it simmer for a couple of hours less than called for, but only because I’ve noticed that even on low, my slow cooker seems to cook faster than most.
Now, if your family is anything like mine, they’re kind of picky. OK, they’re really picky. With that being said, I omitted the mushrooms. Yes, I know they could have been picked out, but that would have been a waste, which is somewhat of a pet peeve of mine. I also used frozen egg noodles rather than dry, because they taste so much better.
You know what? The recipe still came out just fine. In fact, it was really good. I mean, really good. That’s how versatile this is, you can change it up and tailor it to your family’s taste. I can’t wait to try the other varieties, like Sweet and Sour Chicken, Verde Chicken Enchilada and Three Cheese Chicken Florentine.

I was selected for this opportunity as a member of Clever Girls Collective and the content and opinions expressed here are all my own.